About 40km south west of Venice lies the small town of Padua. According to wikipedia…

“Padua stands on the Bacchiglione River, 40 km west of Venice and 29 km southeast of Vicenza. The Brenta River, which once ran through the city, still touches the northern districts. Its agricultural setting is the Pianura Veneta, the “Venetian plain,” To the city’s south west lies the Euganaean Hills, praised by Lucan and Martial, Petrarch, Ugo Foscolo, and Shelley.

The city is picturesque, with a dense network of arcaded streets opening into large communal piazze, and many bridges crossing the various branches of the Bacchiglione, which once surrounded the ancient walls like a moat.

Padua is the setting for most of the action in Shakespeare’s The Taming of the Shrew.

Padua claims to be the oldest city in northern Italy. According to a tradition dated at least to Virgil’s Aeneid, and rediscovered by the medieval commune, it was founded in 1183 BC by the Trojan prince Antenor, who was supposed to have led the people of Eneti or Veneti from Paphlagonia to Italy. The city exhumed a large stone sarcophagus in the year 1274 and declared these to represent Antenor’s relics.

Patavium, as Padua was known by the Romans, was inhabited by (Adriatic) Veneti. They were reputed for their excellent breed of horses and the wool of their sheep. Its men fought for the Romans at Cannae. The city was a Roman municipium since 45 BC (or 43). It became so powerful that it was reportedly able to raise two hundred thousand fighting men. Abano, which is nearby, is the birthplace of the reputed historian Livy. Padua was also the birthplace of Valerius Flaccus, Asconius Pedianus and Thrasea Paetus.

The area is said to have been Christianized by Saint Prosdocimus. He is venerated as the first bishop of the city.” 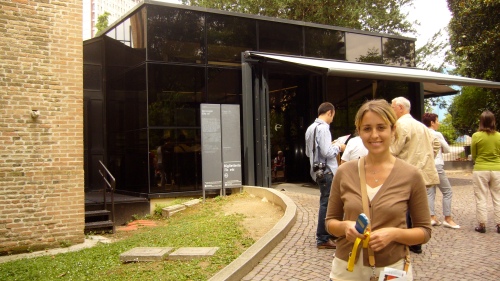 Sasha outside the Scrovegni Chapel

In 1303 Enrico degli Scrovegni commissed Giotto to paint the walls and ceiling (basically, everything but the floor) of his recently completed chapel that adorned his family’s palazzo.  Enrico was feeling a bit ashamed because he had inherited his family’s immense wealth which had been accumulated through lending, a practice he had continued.  Like the Wall Street bankers of today, Enrico and his family were accused of (and probably were guilty of) usury, a serious sin, according to the church.  One way to ensure you got to heaven if you were a userer, was to spend a ton of your profits building something to the glory of g-d (and his church).  Enrico, having great forethought, also wanted to build himself a nice place to be buried, so people could think of how rich he was long after he was dead.  Enter Giotto, stage right.

Giotto di Bondone, a Florentine painter and architect, can easily be called the father of the Italian Renaissance, because virtually everything else can be tied back to him.  Breaking with hundreds of years of Byzantine tradition, Giotto used perspective and color to represent real people, real emotions and inject real lighting into his work.  Five hundred and fifty years later, the Realists would again break traditions that then led to the french impressionists, neo-impresionists and cubists (leading directly to all modern and contemporary art).  Even these revolutions owe their debt to Giotto.  That’s how incredible this guy was.

So what does Giotto do with Scrovegni’s chapel?  He covers the entire place with a cycle of fresco’s that tell the story of the life of Mary and Jesus, and also shows off the last judgement.  Why do I think this is so great?  Because the chapel is relatively small, only 25 people can be in it at a time and you only get to spend 15 minutes in there each visit.  So you get a very intimate visit with this artwork.  And it is incredibly beautiful.

Seriously, look at that fresco.  Look at how the whirlwind of motion and action seems to completely halt around the central figures of Jesus and Judas as if they are standing in the eye of a hurricane.  Look how he uses lines to create motion and give structure to the space in the image.  Look at the magnificence of color used and how it brings the characters to life.  Look how real the representations of the people are.  Look how Giotto uses color to show the folds of the garments and the sources of light in the image, light which comes from the torches. Look at the richness of the detail, how you can see the patterns on the hems of the robes.  Look at the serenity and focus on Jesus’ face, as if he knows what is going to happen to him (which, he does) and how it contrasts to the palpable fear seen in Judas’ expression.  This is 1303-1305, people.  We are talking about a history of religious art that looks like this: 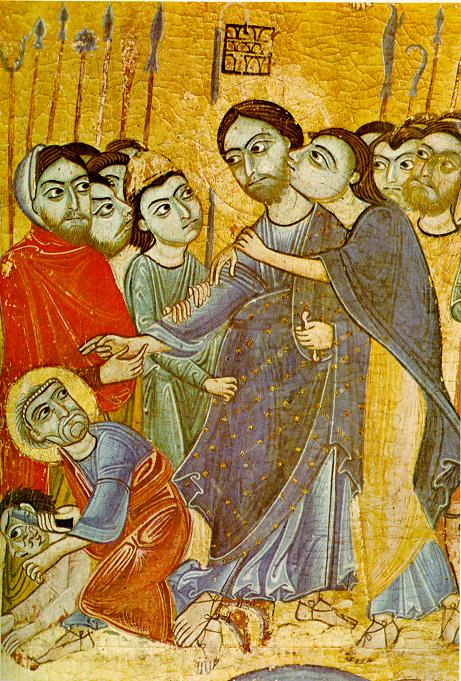 Not quite the same, is it?  And this example is one of the best.  It sits in the Uffizi.

Anyway, I really don’t have the ability to describe what these tings look life up close.  But they make you feel small (in a good way, like the vastness of the universe).  And full of awe.  And joyus.  And happy.  And lucky to be seeing them.  And they are much larger than you expect them to be.  And there is not a single space in the chapel that isn’t painted in the fresco style, including fake marble and architectual finishings.  You should go and see them for yourself.

In fact, I went to see them in January 1994 on my last trip to Italy.  The only problem was, I got there on a Monday…and it is CLOSED on Mondays.  It took me 15 years to get back to Padua…and it was worth the wait.

So, it is with that as a preamble that Sasha and I grabbed a cab for the 10 minute ride to a suburb called Rubino to visit Le Calandre.

Le Calandre is run by Massimiliano Alajmo and his brother Raefelle. It has 3 Michelin stars, and Massimiliano become the youngest chef to ever earn 3 stars when he did so at 28 (what the hell are you waiting for?). This guy is no slouch.